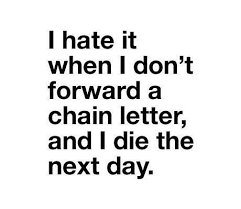 A lot of such messages with unknown source keep on roaming and people spread these messages without confirming their authentication and when someone tries to find out the source he/she only finds a chain of senders leading to unknown source. Once I received a message as a translation of a verse from Surah Al-Mulk, and when I checked I found that there is no such verse in that Surah.

I get worried in this situation as this is the matter of our Deen and this kind of things are misleading the people. Sometimes I think this may be the tactic of mobile companies to make money. As they know that we are very sensitive regarding our Deen, they use our sensitivity for their own material benefit as people send more and more text messages believing they are doing a good deed and as a result, these mobile companies make money. Kindly reflect on this.

In the Name of Allah, the Most Gracious, the Most Merciful.

In today’s world of technology, it has become very easy to spread messages instantly.

The one who lies against me should prepare his abode in the fire. (Sahīh al-Bukhārī)

Hence, one should not send such messages to others until the status of such narrations is not verified from a competent Alim (scholar of Dīn). The Muhaddithīn (Hadīth experts) have clearly stated that it is impermissible to convey fabricated narrations.[1]

The threats that are received in such emails should be ignored. Such threats hold no weight. The ability to give benefit and the ability to harm is only in the control of Almighty Allāh Ta’ālā. Harm is not in the hands of any created entity. If one abstains from sending such messages due to not being aware of the authenticity of the narration, he is doing what is appropriate. He is not disobeying Allāh Ta’ālā. Hence, there is no reason to believe that he will be afflicted with a punishment for not passing on the message.

Upon receiving such narrations, one should not accept them nor should one reject them. One should simply acknowledge that he/she does not know the reliability of such a narration. Thereafter, the Ulama should be referred to for guidance.