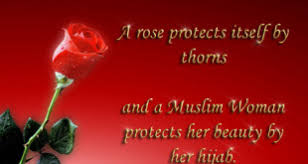 The respected grandmother of Qari Siddeeq Ahmad Baandwi (rahimahullah) was a woman of extreme virtue and piety. She understood the value of time and hence as soon as she would complete her household duties, she would immediately engage in zikr and ‘ibaadat.

One of the many outstanding qualities that she possessed was her concern for purdah. She was so particular in this regard, that when she would go to visit her sister’s home every week, she would insist on going at night (so that the darkness would aid in concealing her). Furthermore, she would send little boys out to survey the streets. It was only when she would receive their assurance that there were no men on her route that she would don the complete niqaab and swiftly depart for her sister’s home.

A further point which highlights her concern for purdah was that she would repeatedly instruct the washerwomen to ensure that they did not wash her clothing in any place where men would be able to see it. After the clothes would be washed, she would not allow the washerwomen to hang them to dry in public. Rather, she would make them bring her wet clothing back to her home where she would herself hang it to dry, ensuring that it would not be seen by any men.

On one occasion she was due to take possession of a certain property from which she would receive some rental. However, government regulations demanded that she present herself in court in order for the property to be transferred onto her name. When she was informed of this, she refused to go to the court and declared, “Whether I receive the property or not, I am not prepared to go the court before men.” In that era, the officials were considerate and would make special concessions for people of deen and piety. Hence an official from the court who was sent to the family said, “There is no need to appear in the court. All we require is that she gives us her fingerprint on this document.” However, she was not prepared for even this to take place and said, “I do not want to have anything to do with a piece of land that is the cause of strange men looking at my fingerprint.”Eventually, on account of her refusal to sacrifice her standards of purdah, she was unable to receive the land. (Hayaate Siddeeq pg. 74 and Tazkiratus Siddeeq, vol. 1, pg. 136)

1. True purdah and hijaab is where a woman tries to remain concealed from strange men in every regard. She does not suffice on remaining out of sight. Rather, she tries to even remain out of mind. In this regard, she will not speak loudly if there are men in the vicinity who may hear her voice, she will not hang her clothing – especially attractive clothing and undergarments – in a public area and if she is forced to be in public, after dressing in the appropriate, concealing manner, she will try her best to remain inconspicuous and will not draw attention to herself.

2. When a woman has the true spirit of purdah, she will be prepared to pay any price to guard her shame, modesty and chastity, as she will realize that these are her true treasures.

(to be continued insha-Allah)