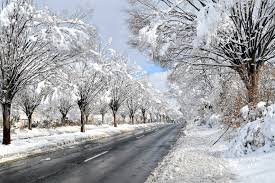 The cold weather of Winter should remind one of the ‘burning cold’ of Jahannam. Sayyiduna ibn ‘Abbas (radiyallahu’anhuma) says:
‘The inmates of Jahannam will ask to be rescued from the excruciating heat of Jahannam. An icy cold wind will be blown upon them, which will cause their bones to ache after which they will beg for heat again.’
(Lataiful Ma’arif)
Rasulullah (sallallahu ‘alayhi wa sallam) is reported to have said, ‘When a person recites the following supplication, Allah Ta’ala says to Jahannam, ‘Indeed, a servant of mine has sought refuge in Me from you, bear testimony that I have granted him salvation from you.’
لا اله الا الله ما أشدّ برد هذا اليوم , اللهمّ أجرني من زمهرير جهنّم

‘Laa ilaha illallahu ma ashadda barda hadhal yawm, Allahumma ajirni min zamhariri Jahannam’
Translation: There is no Diety besides Allah, how severe is the cold of today! O Allah, save us from the extreme cold of Jahannam.
The Sahabah (radiyallahu’anhum) then asked: ‘What is Zamharir?’
Rasulullah (sallallahu’alayhi wasallam) replied:
‘A cold area in Jahannam in which a non believer will be placed, and [due to the extreme freeze] his body parts will break off.’
This du’a is recorded by the following Imams of Hadith:
1. Ibnus Sunni (‘Amalul Yawmi wall ayah Hadith 306),
2. Abu nu’aym in his ‘Amalul Yawmi wal lalylah,
3. Bayhaqi (al Asma was Sifat) (rahimahumullah)
The chain of narrators is [slightly] weak, (Al maqasidul hasanah, hadith: 1283) but suitable for practice.
Imam Hakim (rahimahullah) has mentioned that it is perfectly correct to recite those du’as that are reported in weak Hadiths. See: Al Mustadrak vol.1 pg.490.
Hafiz Ibn Taymiyyah (rahimahullah) has also stated the permissibility of reciting du’as and dhikrs that have been reported with a weak chain.
(Majmu’ul Fatawa of Ibn Taymiyyah, vol.18 pg.65-67)
Hafiz Ibn Hajar (rahimahullah) has said the same too.
(Nataijul Afkar, vol.5 pg.291)
Cold area (Zamharir) in Jahannam
It may come as a surprise to many that Jahannam also has a cold area. The following are more than enough to convince us of this phenomenon:
Sayyiduna Abu Hurayrah (radiyallahu’anhu) reported that Rasulullah (sallallahu’alayhi wasallam) said:
‘Jahannam complained to its Rabb saying: Oh My Rabb, Parts within me have devoured each other.’ So Allah allowed it two breaths; one in summer and the other in winter. Therefore the extreme heat that you experience (on earth) is caused by the heat of Jahannam and the severe cold too is due to the Az-zamharir.( the extreme cold section of Jahannam)
(Sahih Bukhari, hadith 537 & Sahih Muslim). See here for an explanation of this Hadith.
The following Sahabah,Tabi’un and ‘Ulama have affirmed this cold spot of Jahannam:
Abdullah bin Abbas (rahimahullah) (Sifatun-nar of ibn Abid-Dunya, pg.101)

All of the above are (besides no.1) are Tabi’un

Hafiz Ibn Rajab Al-Hambali (rahimahullah) has a dedicated chapter on “The extreme cold of Jahannam “ in his book: At-Takwif minan-nar.pgs. 80-81

Allamah ‘Ayni (rahimahullah) has stated in his commentary of Sahih Bukhari “there is no reason to reject this ‘cold spot’ of Jahannam.’ He also said: ‘Matters of the hereafter should not be analyzed with the experiences of this world.’ (Umdatul-Qari vol.4 pg. 33)