Jannah in this World 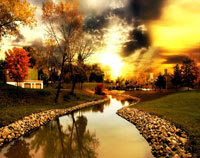 Once Rasulullah (sallallahu ‘alaihi wasallam) was seated with the Sahaabah (radhiyallahu ‘anhum) when he said: “A man from the people of Jannah will appear before you now.” Just then a man from the Ansaar came with his beard dripping of his left-over wudhu water. The same happened for three days consecutively.

When Rasulullah (sallallahu ‘alaihi wasallam) left, ‘Abdullah bin ‘Amr (radhiyallahu ‘anhuma) followed this Ansaari man and said to him: “I had an argument with my father and vowed not to go home for three days. Will you allow me to spend these three days at your place?” The man agreed to this. ‘Abdullah (radhiyallahu ‘anhu) says that he spent those three nights with him (trying to ascertain what act of worship earned him this glad tiding) but he did not find him carrying out any extra acts of worship apart from the fact that he only heard him speaking good.

After the three nights passed, ‘Abdullah (radhiyallahu ‘anhu) said to him: “O servant of Allah! I did not have any problem with my father. Rather the only reason for me spending these nights with you was to discover your special act of worship which has earned you the glad tiding I heard from Rasulullah (sallallahu ‘alaihi wasallam). However, I haven’t seen you do any extra actions. Now please tell me what has taken you to such a position?” The man replied: “I don’t do anything other than what you have seen.” When ‘Abdullah (radhiyallahu ‘anhu) left, he called him back and said: “The only thing extra is that I do not harbour any ill-feelings in my heart for any believer and I am not jealous of anyone for the good that Allah Ta‘ala blesses him with.” ‘Abdullah (radhiyallahu ‘anhu) said: “This is the reason for you reaching this position and this is the thing that we are unable to do.” (Musnad Ahmad #12697)

Lesson: Most of our miseries today are linked to the ill-feelings we harbour for others. “Why does he have that kind of a car or house and I don’t have the same? Why are his children so bright but my children are not?” We need to remember that “when we harbour ill-feelings, happiness docks elsewhere”. This is such a grave sin that even on auspicious occasions, a person who harbours ill-feelings is not forgiven by Allah Ta‘ala. On the other hand, the one who imitates the people of Jannah in keeping his heart clean will be from the people of Jannah.