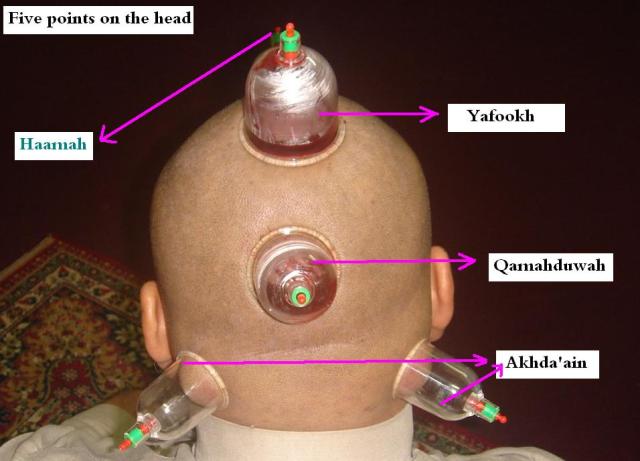 To understand Migraines / headache & the causes behind their existence, please read this article :

The best treatment for Migraine is Hijamah as 5 points on the head, which are Haamah, Yafookh, Qamahduwah & Akhda’ain, they are all the Sunnah points & you may check Hijamah points in Hadith.

As per the following Hadith:

Ibn Al Qayyam also wrote that the weaker side of the brain will accept septic material and the migraine headache will be accompanied by pulsation in the arteries. The pain could be relieved in this case when one ties a bandage so that the pulsing of the arteries is stopped and then the pain is lessened.

Abu Naeem said in his book on Prophetic medicine that the migraine type of headache used to attack Prophet Muhammad Sallallaho Alaihe Wasallam and that it would prevent him from going out of his house for one or two days at a time. In addition, Abu Naeem related from Ibn Abbas radi Allaho Anh that he said,

“Once, Prophet Muhammad Sallallaho Alaihe Wasallam delivered a speech while a cloth was tied around his head.

So before taking a Panadol, try to tie your head with a cloth; & you will be following the habit of Prophet Muhammad Sallallaho Alaihe Wasallam.

There are many types of headaches that result from various conditions. Headaches usually start when the head becomes hot due to the pressure of a septic vapor that accumulates near the head and which seeks a way out of the body but fails. Then, the pressure of the vapor intensifies, just as a pot when it is heated but the steam is unable to escape from it. It is a fact that when moisture heats up, it seeks more space to expand. Similarly, the vapor accumulates near the head and then causes a headache in the entire head because it is unable to expand or escape from the body as it heart up. This condition causes a type of dizziness.

So to remove septic substances & gaseous vapors that cause headache, Formula “T19” is the best Insha’Allah.

Try to keep your food as simple as possible, avoid over-eating & complex food combinations in a single meal, Tibb-e-Nabawi insists for a diet high in Fiber (Barley & its derivatives), low in Animal Proteins & low in healthy fats (Olive Oil exclusively), & absolutely free of damaged fats (Vegetable oils made by solvent extraction), PLUS some beautiful Diuretics that do not deplete Electrolytes, Nabeez ~ Drink made with soaked Raisins, Barley Water & Sakanjabeen (Honey & Vinegar) are the best beverages for you.