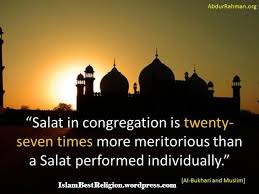 “Once, some people had requested Hadhrat Moulana Yusuf Binnori (Rahmatullahi Alaih) to come to the opening of their shop after the

Jumu`ah Salaah. Hadhrat said to them: ‘On Fridays I perform

Asr Salaah in my

Musjid. Ensure that my

jamaat salaah is not missed.’ They assured

jamaat. Generally, people are extremely enthusiastic to take the saintly personality to their place since they only consider their own motives. As far as others are concerned then they are inconsiderate. When

jamaat salaah was over. Seeing this,

Hadhrat crying profusely on that day and he lamented: “We do not possess the reality of

Salaah. All we have is the imitation. The correct manner of

Salaah is unknown to us. We merely imitate Nabi (Sallallahu Alaihi Wasallam). If this imitation also does not remain, then what else do we have!”